Cheaper and smaller version of the Colony Ship, exclusive to the Hyper-Expansion PRT.

The Mini-Colony Ship is the HE cheap alternative to normal colony ships. It is also the only ship in the game able to use the Settler's Delight engine, a very cheap ramscoop engine (not removed by No Ram Scoop Engines) able to go as high as Warp 6 without using fuel and marginally capable of Warp 9 travel.

It is commonplace for an HE player to take advantage of the Mini-Colony Ship hull and Settler's Delight combo by switching the Colonization Module on the initial Spore Cloud design for Cargo Pods and Fuel Tanks, creating extremely cheap freighters and fuel boosters that do not depend on the Fuel Mizer or normal ramscoop engines.

Note that the Mini-Colony Ship gains greater rewards than most other hulls from abusing the Colonization Module bug, as the resulting coloniser costs a mere 5 resources and doubles as a freighter and fuel booster. In games where that bug is banned, therefore, it is advisable to avoid building Mini-Colony Ships with the Mechanical slot left empty; doing so is likely to draw immediate suspicion of cheating. 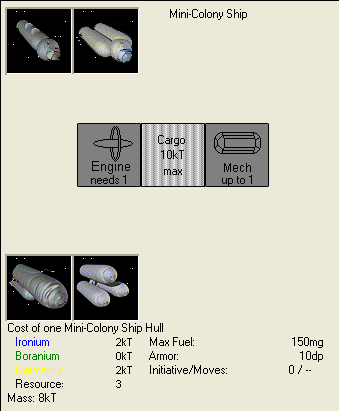