The mini mine layer (MML) is a hull exclusive to the Space Demolition PRT.

Players fond and wary of the SD PRT alike learn to recognize this hull type early and well. The MML ability to wander thru exploding minefields of the owning player unscratched mixed with the racial SD racial ability to be able to lay mines while in movement undoubtedly contributed directly to the head breaking headache reputation that the SD PRT have acquired over the years. The MML also double the amount of mines deployed by the mine layer pods installed within its bulkheads which both prove the superiority of the SD PRT versus other PRTs to lay space mines while stationary and cancel out the con of the SD PRT which restrict the deployment of only half the traveling fleet space mine complement while moving.

The exclusivity of this hull to the SD PRT being only a restriction to the construction and not to the ownership of the resulting ship itself, the MML can contribute not only greatly to the early defense of the SD player but also be used successfully in diplomacy by trading with other players. While the new player only retain the double mine laying capability of the MML hull, the SD player can build and offer all three types of space mine variety in the game (Standard, Heavy and Speed Trap) and lower the mine laying pods from 4 to 3 to create a new mine layer ship which is both easily gatable and at least twice as efficient as standard FF mine layers. War Monger players in particular, who are unable to build mine laying pods on any of their own ship, are forced to trade for mine laying ships to be able to own minefields and thus can turn a MML trade or even an SD ally into a premium. All other races (short of the Inner Strength PRT who can also build the basic speed trap mine 20 pod) are restricted to the basic standard and heavy dispensers and downright cannot build speed trap dispensers and thus can also benefit greatly from MMLs sporting advanced dispensers.

Not shy from already being a very appreciated specialty hull, the MML also possess a Scanner/Electrical/Mechanical slot which greatly improve the operational versatility of the hull. A fuel pod for extended range, maneuvering jet to evade possible enemy interceptors or stealth cloak for covert mine laying are all perfect options to further the MML reputation among the game community. Many players venerate this hull so much that a whole cargo pod equipped MML/freighter design strategy have been created and successfully enacted by some SD players in the past. The MML hull have been known to be so useful and versatile to SD players that rumor has it that the main problem of SD players in the course of a game usually revolve more around the micro management of the 16 max ship designs slots than the usual micro management of the whole empire...

All this universally turn the MML into the most annoying and the most venerated ship in existence in STARS! for all parties concerned. 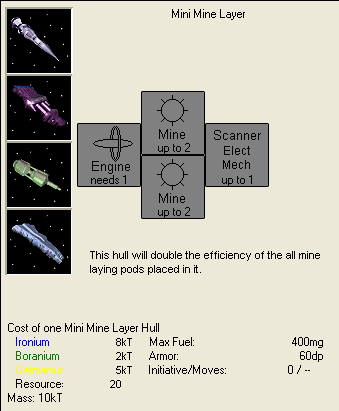