From Stars!wiki
Revision as of 11:47, 5 December 2011 by Autohost (talk | contribs) (→‎Andre: Removed obsolete reference to Andre receiving emails when SAH is down, and his alleged ability to do anything about it.)
(diff) ← Older revision | Latest revision (diff) | Newer revision → (diff)
Jump to: navigation, search 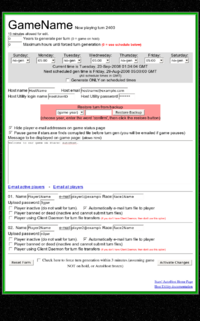